'The pen of mischief' by Lily

A story by George!

The perfectly round moon shone above Ghastly Town, where spirits come to life and mysterious beings roam. All of the fluffy, grey clouds were made white because of the moon’s blinding glow! Ghastly Town was a small town made from rickety, ancient buildings only just standing. The tallest of all the buildings, which was a haunted church, swayed ominously in the midnight wind. A screechy, horrible creaking sound could be heard from the church’s mouldy, wooden planks, which were all nailed tightly next to each other. Wedged into the top of the churches steeple, there was a huge clock, behind which was a bronze, rusty bell, this bell would chime at the start of every hour and when there was a haunted wedding.

Sitting in the centre of the town, a stone, eerie fountain gushed out not water, but ancient spirits which are the leftover remains of monsters who did not want to go to their afterlife in Hell. On top of this mystical fountain, a marble knight, who had long ago stopped shining, stood proudly with his sword clasped in both hands as if this was his lifeline. An ear-splitting yowl came from an evil cat’s mouth. Unexplainably, the cat’s screech suddenly turned into a witch’s cackle. As the cat’s voice changed, curiously the cat’s body stayed as an unlucky black cat. Slime men and women ran for their lives as they saw the cat coming. Evidently, the cats of Ghastly Town found Slime people a scrumptious snack!

A deep, dangerous voice laughed maniacally in the distance. It sounded almost like it had just killed or captured its worst enemy. Inside a half-demolished shack, a child slime boy, who was being egged one by all of the teens, cautiously picked up a jagged stone from the dank, damp floor and hurled it at the next door window. After a short gap of time from contact with stone and window, a flickering spotlight blared through the window frame. All of the teens, and indeed the child sprinted out of the door. The depressed man, who had sat unnoticed by any of them, got up sadly and followed the mischievous kids out of the door. He began a sad, lonely journey through Ghastly Town and somehow ending up on a roof. For his breed of monster, he was really tall, but compared to the only human’s chimney, he was absolutely tiny! He continued plodding over the many roofs and eventually came to the human’s house. He did not know why but he was somehow drawn to it, like something or someone was calling him...

His jaw dropped as he saw a room full to the brim of books. Books about science, poetry, cooking, children’s stories and many more! He jumped in fear as he saw a bearded human slumped in an armchair. In front of the human, there was a spindly legged table over landed with books. The thin legs could barely hold the weight of the many books. At least eighty books were on that table alone. Never mind the hundreds more scattered in piles across the room. The Slime Man let out a tiny sigh of relief. Silently, he scaled a pile of books to reach the table. He didn’t know why, but suddenly a wave of daring washed over him. Without thinking, he carefully climbed up the man’s hazelnut brown coat. Still in his sleep, the very same man lifted his chest and took an intake of breath, ready to sneeze. Thinking on his feet, the Slime Man jammed one of his fists up each of the man’s nostrils to prevent the sneeze. He yanked his snot covered fists out of the man’s nose and wiped them all over his coat.

The smelly [or so the Slime Man thought] human went back to snoring peacefully. From the corner of his eye, the Slime Man couldn’t help noticing a beautiful candle staring out of the window. She heard his almost silent footsteps so her head turned. Her eyes fell upon the Slime Man. His eyes were drawn to hers. They both blushed slightly as their eyes first made contact. He reached out to to her face but at the speed of light he pulled his hand back. He had burnt himself on her flame. He made it to a nearby roof and stared longingly through the window. He glanced down at his hand and saw the burnt slime vanish to be replaced with new slime! He looked back up at the grimy window in time to see the once sleeping human extinguish the candle he loved with a blow. As quick as he could, the Slime Man rushed back round to the door. Peering round it, he saw that the human had retreated upstairs. He dashed to the candle wax with no flame and embraced it. He wept and wept. Black tears trickled down his slimy face. Without him noticing, the wick placed in the centre of the wax stretched and stretched. It transformed into dark grey, wispy smoke. This smoke flew through the air and landed on a book nearby. Except now it wasn’t smoke, but a Slime Woman!!! The Slime Man rushed over and looked into her eyes. He saw the same eyes that he had seen in the candle. They recognise each other. Just as the sun started peeping over the hills, they both hugged each other tightly. 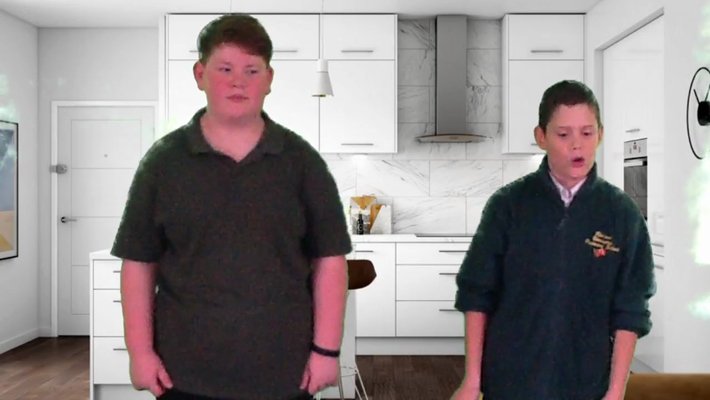